….”But there’s more than that….much ,much more than that in this riveting and remarkable production of on of the blackest of all black comedies….

The main character, however, and the most stunning and penetrating portrayal of all is that of Stephen Hamilton as Father Welsh, the lost and ravaged priest….It’s a bravura performance in a company of brilliant performances, all the more so because Hamilton has directed the production extraordinarily. He’s drawn out every actor, including himself, performances that have only been hinted at before and woven a spell that in its intensity, enormity, energy and concentration is a world in itself.”

“…but even if you are immune to soul-searching, you’ll find Hamilton’s taut interpretation of “The Lonesome West” a revelation. And pretty funny too” 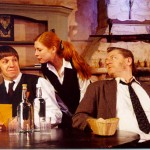 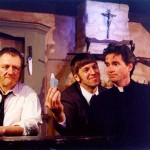 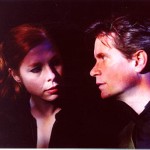