“The most nastily satisfying of the bunch is LaBute’s “The Furies,”….. peaks with the most berserk three minutes of the entire summer. The play may be the size of a cupcake, but there’s space for a razor blade inside.”

“The play is staged beautifully by Stephen Hamilton who has been doing fine work at the Bay Street Theatre in Sag Harbor for many years, as well as the John Drew Theatre in East Hampton.” 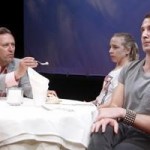